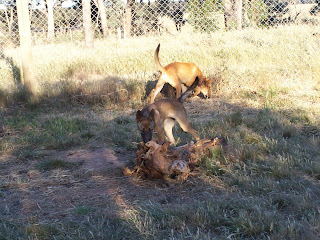 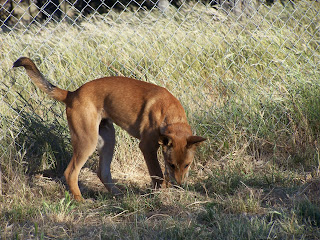 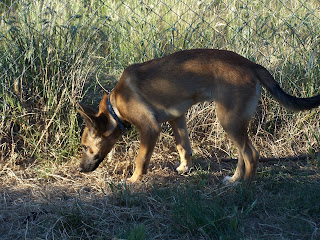 In July this year Richard drove up to Queensland to collect a wildborn litter of dingo pups.  They were found at about three and a half weeks of age - in a hollow log, which had been disturbed whilst a fence was being constructed.  Three of the pups were quite dark in colour, the fourth was ginger.
The fencing contractor took them home to Toowoomba, but couldn't keep them, so we found out about them through a Queensland contact.
The pups are now approximately 6 months old.  the three darker ones are now a sable colour, whilst Lance, the ginger one, and the biggest has now developed some colouration over his forehead.   the other pups' names are:-
Cadel, Contador, and Twoey, who was named after one of our original Pilbara dingoes who had recently died.
We have taken swabs for DNA and are awaiting results.
Posted by Bushland Dingo Haven at 13:44 No comments:

We are now arising to heavy frosts in the mornings.  This morning a lot of the dingoes were sitting out in the grassy areas which were white with frost, and their water buckets were iced over.  The dingoes are not eating much at the moment - post breeding season and no bitches in pup or feeding pups.  They were given 6 chicken drumsticks each yesterday evening (work that out for 41 dingoes), and the only ones who ate most of their food were the yearlings.  All the rest might have eaten one or two drumsticks but left the rest.
Seventeen of the males were chemically castrated at the beginning of the year, annd their testicles remain very small, with no sign of returning to the normal size.  We are told by the company producing the implants that the non fertile phase can last for up to 12 - 18 months, and that is just for the ones that supposedly only last for 6 'months.  Let's hope we don't have to use any males next year.
Posted by Bushland Dingo Haven at 12:02 No comments:

Bushland Dingo Haven: Cold weather, and dingo doings: "Our weather is now below zero in the mornings, and about 70 km away people are relishing the snow. Richard has put straw in most of the ken..."
Posted by Bushland Dingo Haven at 21:53 No comments:

Our weather is now below zero in the mornings, and about 70 km away people are relishing the snow.  Richard has put straw in most of the kennels.  The dingoes have developed quite thick coats.  Those that come from warmer climates have short dense coats, whilst the alpine dingoes' coats are longer and slightly thicker.
For several days in a row last week very few of the dingoes ate.  Whether it is because it is the end of the breeding season, or they just didn't want to eat their mince chicken, wings or beef mince, they just left the food in their bowls.  We check each morning when we let each group of dingoes out for their morning exercise, and collect any food that is left.  Good stuff is re-used.  Bad stuff is discarded.  On average we go thru 25 - 30 kg food a day.  We refuse to use just dry dog food, or to just put out the occasional chicken neck or wing for them to crunch on.  Some days we get to saw up ribs and backbones of cattle or horses, and the dingoes will ignore their usual food in preference for the bones.  Other people who have large numbers of dingoes, and even those with only one or two, commonly feed their dingoes dry food.  I wonder how they would like a diet of peanut butter sandwiches seven days a week, with no variety?
Two young bitches, sharing an enclosure with an older, black and tan dingo who is unrelated to them, have taken to having disagreements.  The smaller one retreats to a den under one of the kennels, and will stay there most of the day, but this morning I took the three of them out for a long walk on lead.  They got to smell where kangaroos and small native animals hade been, and thoroughly enjoyed themselves.  When we returned home, I made up some cereal with hot water, milk and an egg, and gave them a bowlfull each.  It was consumed very quickly, especially by the smaller of the two bitches, who was born the runt of her litter.
Posted by Bushland Dingo Haven at 11:51 No comments: 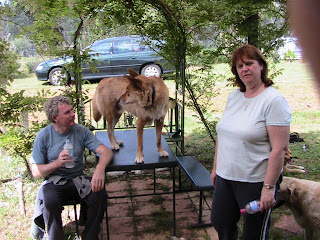 What a wonderful day ! We've had some absolutely lovely visitors today; we've talked about the dingoes, shown them the setup, and allowed them to meet/greet some of the families. The visitors enjoyed the interaction, as have the dogs.

Thank you all for you time and generosity.
Posted by Bushland Dingo Haven at 17:07 No comments:

We have 41 dingoes and live near Benalla, in Victoria. come and visit us

Posted by Bushland Dingo Haven at 19:19 No comments: